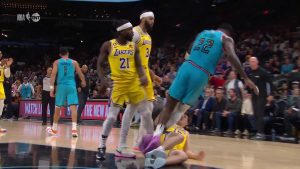 In a statement from the league, vice president and head of basketball operations Joe Dumars stated the length of the suspension is “based in part on Beverley’s history of unsportsmanlike acts.”

Beverley will be suspended without pay, costing over $268,000.

Beverley pushed Ayton after Suns guard Devin Booker committed a flagrant foul on Lakers guard Austin Reaves. Booker stood over Reaves after the foul, as did Ayton. Beverley acknowledged the act as unprofessional but was protecting a teammate, which other Lakers echoed.

“Got a person on the ground, two people looking over mean-mugging and puffing their chest out and referees don’t get into it to kind of separate it, control the game, so I’m going to stand up for my teammate,” Beverley said in postgame.

“I’m not going for that shit,” Beverley said. “Obviously, it’s unfortunate that it happened on national TV. But you know me: Regardless of what’s going on, I’m a big fan of protecting my teammates. … I’m a foxhole guy. I put on the jersey, and I commit to a team, I commit to a city, and it’s kind of my motto. I’m a foxhole guy.”