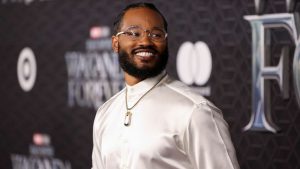 Ryan Coogler is thankful for you this Thanksgiving season. Sharing a letter online, Coogler thanks fans for the success of Black Panther: Wakanda Forever.

“Gratitude. That is the only world that comes to mind for your support of our work on the film Black Panther: Wakanda Forever,” he wrote. “I am filled with it. Thank you. Thank you to the people who bought their tickets early and camped out opening weekend. Thank you to those of you who took their families out—young ones and elders in tow.

“To those who organized youth screenings and afterparties, who bought out theaters for communities and friends. To all of you who watched multiple times, and encouraged other folks to check it out.”

Marvel’s Black Panther: Wakanda Forever hit the box office with the strength of vibranium. The long-awaited return to the fictional African nation of Wakanda brought in a November record $180 million over the opening weekend domestically. The international film total was $330 million.

According to Variety, the opening weekend number blew past the $158 million mark set by The Hunger Games: Catching Fire in Nov. 2013.

Wakanda Forever now stands as the second biggest domestic debut of 2022, following another Marvel film Doctor Strange in the Multiverse of Madness. The film is the third-best pandemic-era debut, following Spider-Man: No way Home, which made a $260 million splash.