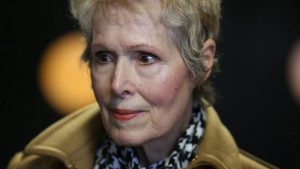 Former Elle columnist E. Jean Carroll sued former President Donald Trump for the second time on Thursday, alleging defamation and battery under a new law in New York that allows adult sexual assault victims to file claims that would otherwise be barred by the passage of time.

Carroll sued Trump in federal court in New York for battery after he allegedly “forcibly raped and groped” her in a Bergdorf Goodman dressing room in the 1990s. The suit further alleges that Carroll suffered injuries causing significant pain and suffering, lasting psychological harms, loss of dignity, and invasion of her privacy.”

The civil lawsuit accuses Trump of the following: 1. rape in the first degree; 2. Rape in the third degree; 3. sexual abuse in the first degree; 4. sexual abuse in the third degree; 5. sexual misconduct, and 6. forcible touching. Carroll’s attorney, Roberta Kaplan, said at a court hearing that her client “intends to hold Donald Trump accountable not only for defaming her but also for sexually assaulting her, which he did years ago in a dressing room at Bergdorf Goodman.” Carroll is requesting that the court grant her an unspecified amount in damages.

Trump, who has denied the allegations against him, said in a statement that Carroll “completely made up a story that I met her at the doors of this crowded New York City Department Store and, within minutes, ‘swooned’ her. It is a Hoax and a lie, just like all the other Hoaxes that have been played on me for the past seven years.”