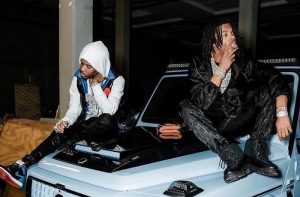 Revisiting his It’s Only Me album, Lil Baby has dropped a video for “Pop Out” featuring Nardo Wick.

In the video, the 4PF leader is seen in a day in the life style video, bringing the rapper to appearances, handling business at a computer, and being chauffered in a Maybach from one stop to another.

He is later joined by Nardo on the hood of an SUV to finish off the video and supporting bars.

The official “Pop Out” video can be seen below.