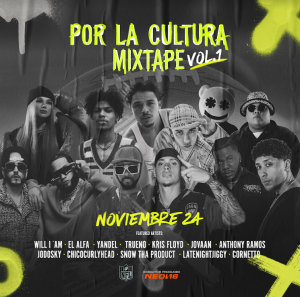 Por La Cultura Mixtape: Volume 1 is released by the NFL in collaboration with NEON16 and features performances by Will.I.Am, Anthony Ramos, El Alfa, Yandel, Snow Tha Product, Trueno, and others. The mixtape includes unique songs that celebrate the game’s sounds in fresh, contemporary ways while capturing the energy and flavor of Latino culture.

The collaboration consists of 10 original songs, including the popular tune “Rómpela,” which was released earlier this year as the background music for the NFL’s “Por La Cultura” campaign commercial, “The Celebration.” It features Yandel, El Alfa, and Will.I.Am. “Latino Activo,” a positive dedication to the energy and passion Latino fans bring to the game every week, is the second single to be released. It is the lead single and features actor and recording artist Anthony Ramos. Similar modern Latin sounds can be heard in other songs on the album, incorporating reggaeton, trap, dembow, Latin pop, house, EDM, and crossover rhythms. Throughout the season, the music will be utilized at the league and club levels to improve in-game aspects, marketing activations, and social media content.

“The Por La Cultura Mixtape: Volume 1 is one of many league efforts to connect more deeply with Latino fans, especially through music which is consistently shown to be a leading passion point for this community,” said Javier Farfan, Cultural Strategist at the NFL. “NEON16 as the premier Latin music powerhouse was the perfect partner to bring this concept to life and imbue the energy, passion and overall football vibe to each track that, at its core, connects high energy and high impact sounds with youth and pop culture.”

One Six and NEON16’s Head of Creative, Ivan Rodriguez, notes, “It’s a dream come true for One Six and NEON16 to partner with the NFL and these talented artists to create a modern, Latin-focused soundtrack for this amazing sport that connects with so many people worldwide. This compilation is an important cultural milestone to continue celebrating the inclusion of all the voices and backgrounds that make up the DNA of this global sport. Latinos activos!”Rómpela” Will.I.Am, Yandel, El Alfa; produced by Chael

“Giving emerging artists a platform was a key objective in this project and the breadth of talent and genres in this collection helped cultivate relationships, energy, and inclusivity,” said Lex Borrero, NEON16 Co-Founder. “Anthony Ramos’ song, ‘Latino Activo’ for instance, is powerful and intentional, and Snow Tha Product brings her strong, Mexican energy to the project as well. It’s these vibes that transcend borders and evoke passion, pride and energy – key elements that reflect the game of football and what the league represents for fans.”

“This collaboration truly showcases a variety of musical styles and versatile artists coming together to create a fusion of sounds, all in the name of Latino culture,” added Marissa Solis, NFL SVP Global Brand and Consumer Marketing.

You can hear the mixtape below.