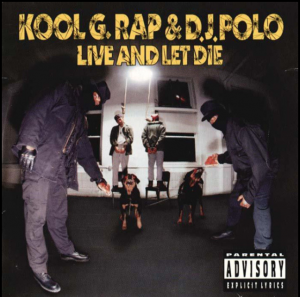 Even though Warner Brothers refused to distribute G. Rap’s album due to the graphic cover art and lyrical content, Live And Let Die is still considered one of G. Rap’s best albums of his career. Produced primarily by Ice Cube’s Lench Mob’s Sir Jinx, the production had a constant West Coast feel, which was saturated with criminal content or “gangsta rap” during the early to mid-90s.

From robbing his Italian mob plug on “On The Run” to killing a drug partner who was delinquent in money owed “Ill Street Blues”, Live And Let Die focused on the intricacies of criminal life; the ups and the downs. The original 17-track album also featured a classic track called “Two To The Head” featuring Ice Cube, Bushwick Bill and Scarface. The 2008 bonus disc featured several remixes of “On The Run” and “Ill Street Blues.

Salute to G. Rap and Polo for this timeless and classic piece of Hip Hop history!

The post Today In Hip Hop History: Kool G Rap And DJ Polo Dropped Their Third And Final Album ‘Live And Let Die’ 29 Years Ago appeared first on The Source.