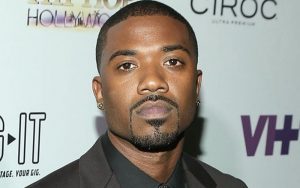 Along with enlisting Grammy award-winning recording artist 2Chainz as the new Head of Creative Marketing, Krystal — a long-standing Atlanta-based fast food chain — has increased its star power with the announcement of the chart-topping entertainer and serial entrepreneur as the company’s new Brand Strategist.

In the last decade, Ray J transformed from an established entertainer to a high-profile businessman with instinctive business moves, numerous company launches, and smart tech investments that have amassed millions. After promoting everything from electronics to eyewear to 100% electric-powered bike/scooters, for the first time, the 41-year-old mogul will help guide the southern food chain into a new era and compete against rival food chains in popular chicken sandwich race.

In late September, Ray J stepped away from the drive-thru to take a video call with us during a pop-up event in Atlanta to discuss his new position with Krystal, working with 2Chainz, venturing into the food industry, new music and more. Check out the complete interview below.

[Bryson “Boom” Paul]: Venturing into new territory is not a bad way to transition following the latest news that your tech company, Raycon, is being valued at $31 million dollars…?

[Ray J]: Ha. Listen, I never talk money. I always just talk customers satisfaction, you know what I mean? Customer satisfaction. Now, at my tech company, we’re over 3 million customers now. Over 3 million people have purchased some Raycon earbuds, but now I’ve shifted into another focus because my company is on autopilot. Now, with Krystal bringing me on to strategize about some things, I think we hit the ground running with our late night campaign. I’m excited about all the things that we plan to do now with Krystal. Super stoked about it for real.

Now, congratulations on becoming a brand strategist for Krystal.

Now, I have to ask, if you have one wish for Krystal’s success, what would it be?

[Smirks] Well, I think my wishes are coming true from the jump.

They’re letting me create the way I want to and put together my own campaigns that have us up late night, 20%, right? I’ve been focusing mainly on the late night campaigns and we’re already up a significant number in my opinion, and I think we got a really long way to go because I want to drive this thing through the moon.

And for them to just let me have the freedom to create the way I want to create, it’s definitely not only just helping our energy moving forward, but it’s also bringing better numbers to the company, so it’s all flowing the right way. I think wishes are definitely already in play.

Krystal is your introduction to the food industry. How were you approached to become the company’s brand strategist?

You know what I’m saying? Like the mask. And I pitched that online and as corny as that might be to certain people, it worked, and I was just in a very manifestation mindset. Got to 2Chainz, and then from Chainz, it got to the owner and then from the owner, shout out to JC, and it went from JC to giving me a shot.

We shot about a hundred different drops. I did a few hours of radio promo I felt would be strong. And then we shot about five commercials right there in two days. And so after they saw my drive, they understood how hungry I am, not just for food and for the side chick, but also just hungry to create success for brands that I like and that I feel are strong and that are long term. Krystal’s are over 90 years. 90 year business. Even before I was born. And so to give us a shot at just revamping it to 2022 is a major blessing and I won’t let the team down.

You’ve joined Krystal with 2Chainz as the newly appointed head of creative marketing. Tell us some of the conversations you two have had about renovating Krystal’s relevancy?

I think it’s just about freedom to create, freedom to let your creative skills flow through the company.

And so I pitch my ideas, but then they give me a open canvas to just do what I need to do. They’ve seen what we’ve done with my scooter company, with my tech company and how we know how to target audiences that work for the brand. It’s just all about who’s supporting, finding those people and scaling it, but at the same time, trying to find the supporters that haven’t tapped in yet and get them involved without risking the budget going over.

For me, they’ve been letting me have freedom to create my late-night campaign. Again, we’re up 20% late night, and that’s the most important thing is just continuing to build the numbers. And I’m happy that they let me do what I want to do in the beginning because it’s working. It allows me to do more of what I want to do as we continue to grow together.

Well-known for your late nights in the studio. What were some late-night experiences that you were able to adapt to the new campaign?

Well, right now, I’ve been working inside. You see [pointing at Krystal visor], welcome to Krystal’s, how may I help you?

I’ve been working inside the store and so, in LA we don’t have Krystal, so I’m not able to benefit like I would when I’m always in Atlanta. But what you can get now is the prices are real good for late night. $3.99, $4.99, that’s solid when you just want to come grab something to eat and get a nice good hot Side Chik, you know what I mean? That Side Chik, I mean, you know what I mean. Not the side chick, side chick, but the Side Chik, Side Chik from Krystal. But just to grab that value pack at that number is solid.

And I think people are now starting to have fun with it, seeing our campaigns. I mean, we’re flooding it online, we’re flooding it on TV, we’re flooding it on radio. I think we waking people back up. But again, I met a lady that said she used to go to the Krystal drive through in the seventies and that used to be the hangout spot, even besides the club. It was just Krystal outside, all the cars just having a good time. We want to recreate that in a safe environment and see what happens in that world too.

As the new brand strategist, Krystal brings you a new idea, “All right, we pushing the Side Chik with Brittany Renner as the face of the campaign.” What was your initial reaction when you saw it?

I liked it. I like it a lot. I think we’re trying to create this Geico experience in some of the commercials where we’re just playing off of a lot of stuff that people are familiar with and we’re just keeping it like we’re not that serious.

It’s one of those make you laugh, make you think, and then you go and get you some side chicks at Krystal. I think it’s dope. I think it’s dope. I got a few ideas for myself and Brittany, too, that I’m about to put in next week in the email, so hopefully, my ideas stick because I got some funny stuff. But I like it, though. I really like it.

If you could customize your own Krystal combo meal, what would it be?

Well, I mean, you got to have the snacks, sides, shakes and fries, but you got to have a Side Chik too. They say you can’t have your side chick and french fries and shake and eat it too? At Krystal, you could have it all, you know what I mean? Give me the snacks, but then give me the Side Chik, give it to me plain so I can dress it up myself, you know what I mean? I want to mix it in with all my little sauces that I got and then give me the fries and then give me a strawberry and vanilla shake mixed together. You feel me?

Okay. Okay. Now, while enjoying the combo. I have to ask you, what 2Chainz song would you like to play while you’re enjoying your combo?

Well, since it’s the Side Chik campaign, all I want for my birthday is a Side Chik.

Yeah, I’m doing a “One Wish” anniversary album; it’s called Radiation X. Just all the songs that tapped in on that album. We redid new vocals, melody, “One Wish.” I got Jacquees, I got Tamar Braxton. We did a crazy movie too that’s star-studded with all actors that’s been on all of the big shows. It’s a short film tied into the “One Wish” anniversary project.

And then on another note, we got the big group coming, RSVP, Ray J, Sammie, Bobby Valentino, Pleasure P. Album’s done. We just did our album photo shoot, album cover shoot. Now we going to do the video and we launch it. And this album is a very RnB sexy driven album that’s uncut that I think is definitely missing in the industry right now. I think it has its own lane. And what’s dope about the RSVP thing is that we all just came together and did it. We don’t have a deal. We all put up our money and just spent two months together from the Dominican Republic to L.A. to New York and we did a dope album in Atlanta. That’s the big play coming along with the “One Wish” anniversary project from me.

And lastly, you’ve grown into one of the most successful black entertainers of our generation. How does it feel to become a role model?

Yeah, it’s tough putting myself in a role model position. I feel like I got a lot more work to do as far as to be titled that. But I do want to eventually show people how we do it because it’s totally different from even my mentors or the people that’s at the top spot. The way we’ve climbed through these systems and been able to survive and move the needle forward, it’s a whole different ride. And so, hopefully I can show people how it looks on this side, but I got a lot more work to do. Once I get somewhere past where I’m at now, I would love to run it down.

But again, I’m not a celebrity. I’m an entertainer for sure because in just day to day, I just entertain for fun. But I’m more just a worker, man. I like to just title myself a worker. I’ll never sit in a CEO position or a COO position, even if I founded the company, because I feel like you have to hire the right people to do justice for the company. And so, having experts in these different areas matter. And for me, I’m a just stay strategy, stay finding these companies and if I’m buying it or if I’m coming on board with Krystal, just making sure I do my part and make sure we win…

Because people don’t understand you can be lit. I don’t hide behind my litness, it’s just you can be lit and still get work done all day. You just be lit in the office, be lit in the creative room, instead of wasting your litness out doing nothing. I want people to see how I balance the two and see how it works because then all this stuff that they might think is boring starts to become fun if they could tap into them and just be themselves through the whole process, you get me?