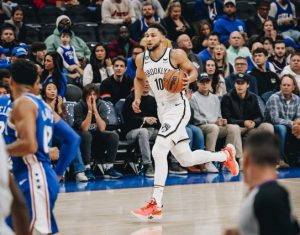 Ben Simmons made his long-awaited return to Philadelphia. The boos were not as loud as the former 76ers guard expected, but he and his Nets teammates still couldn’t pull out a win.

The game on Tuesday night at Wells Fargo Center wrapped up at 115-106, but Simmons added another impressive showing of 11 points, 11 assists, and seven rebounds.

“I feel like I’m in a good place,” Simmons said in his Post Game media availability. “I’m happy, I’m doing what I love. So to be out there and have that experience was amazing. Obviously, it wasn’t the result we wanted. It’s frustrating to lose a game like that, but I think it’s a good step forward.”

Kevin Durant acknowledged the emotions of the game but stated the best way to play is by bringing their best every night. “Everybody wants to see our team fail. Nobody likes Ben, nobody likes Ky, nobody likes myself, so it might be like that at every road arena.”

The Sixers played without their star trio of Joel Embiid, James Harden, and Tyrese Maxey but received 24 points from Tobias Harris.

A competitive game between the Los Angeles Lakers and Phoenix Suns on TNT was overshadowed by a scuffle in the closing moments. When Suns guard Devin Booker blocked Lakers guard Austin Reaves, he stood over him and had some words. He was followed by center DeAndre Ayton who was mouthy in earlier possessions and also stood over Reaves. Patrick Beverley charged at Ayton, pushing him to the ground.

“Got a person on the ground, two people looking over mean-mugging and puffing their chest out and referees don’t get into it to kind of separate it, control the game, so I’m going to stand up for my teammate,” Beverley said in postgame.

Beverley was ejected, Booker received a flagrant foul 1, and a technical foul was issued to Ayton.

“I’m not going for that shit,” Beverley said. “Obviously, it’s unfortunate that it happened on national TV. But you know me: Regardless of what’s going on, I’m a big fan of protecting my teammates. … I’m a foxhole guy. I put on the jersey, and I commit to a team, I commit to a city, and it’s kind of my motto. I’m a foxhole guy.”

On the basketball side, Anthony Davis continued his run of 30 and 15 games by bringing in 37 points and 21 rebounds. Booker and Mikael Bridges led the Suns with 25 points each.

Elsewhere in the league, the Detroit Pistons got their first road win over the Denver Nuggets, and the Sacramento Kings got their seventh win in a row over Ja Morant and the Memphis Grizzlies.