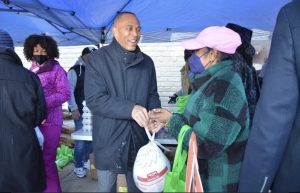 Following Nancy Pelosi’s resignation as the Democratic leader of the House, the spotlight has fallen on
New York Representative Hakeem Jefferies, has announced his intention to run for the soon-to-be
vacated leadership position and seems poised to assume that position, pending the Democrats’
Congressional leadership elections on November 30.
Jefferies was born and raised in Brooklyn and attended New York City public schools before getting his
B.A. from Binghamton University, his Masters from Georgetown University, and his J.D. from New York
University School of Law. In 2006 he was elected to represent New York’s 57th Assembly District, where
he gained notoriety for authoring and pushing through a bill to end the NYPD’s practice of keeping a
stop-and-frisk database of every single person they stopped and questioned.
In 2012, Jefferies was elected to the U.S. of Representatives, winning over 70% of the vote in New York’s
8th District, which covers parts of Brooklyn and Queens. In 2014 he was elected whip of the
Congressional Black Caucus, and in 2018 he was elected Democratic Caucus Chair.
While Jefferies has sponsored bills focused on criminal justice reform, affordable medication access, and
drug policy, he is a centrist democrat with a history of oppressing the progressive wing of his party. In
In 2021 he founded a political action committee called Team Blue PAC for the purpose of protecting
Democratic incumbents from progressive primary challengers. Jefferies’ efforts to boost centrist
candidates at the expense of progressive candidates in New York City elections have met with mixed
results.
The difficulty Jefferies now faces is that the progressive bloc in Congress is more prominent and better organized
than before, and Jefferies will need their support. As the incoming minority leader, it is critical
that he oversees a disciplined and unified response to the actions of the slim Republican majority.
In interviews, Jefferies has acknowledged and expressed his respect for his progressive colleagues, such
as fellow New York Representative Alexandria Ocasio-Cortez. In his letter announcing his run for leader,
Jefferies wrote that “we can unify around an agenda designed to make life better for everyday
Americans from all walks of life, and simultaneously embrace issues of social justice with the promise of
the Constitution.”

The post Brooklyn’s Own Hakeem Jefferies Poised To Become Top Democrat In Congress appeared first on The Source.