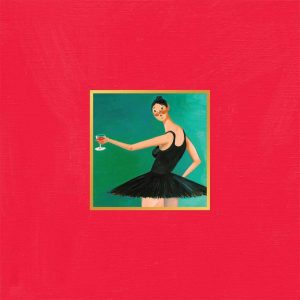 West delivered the album of the decade in 2010. From its composition, multiple album covers, a short film, ballerinas, the infamous red suit, and more, Ye’s My Beautiful Dark Twisted Fantasy would set an almost unreachable precedent for artists of all genres that would succeed the first decade of the new millennium.

He distanced himself from the world and returned to what made us all fall in love with his genius. Ye hid away in Hawaii, working on MBDTF, inviting artists to the island to join his reemergence into the culture’s good graces. Ye would go on record saying My Beautiful Dark Twisted Fantasy is the first album he decided to write down all of his raps because his mission was perfection. His career depended on it.

According to Rory Farrell, who interned at Def Jam during this time, West entered the label’s office, fully dressed in a black suit, with the intention of playing the album, but was unimpressed with what they were wearing. West gave Def Jam an ultimatum: dress better or no album. It was ultimately a privilege. He returned the next day with the album. At this time, “Runaway” was 16 minutes long, but would be condensed to 9:08.

West released a number of covers for the album. The most thought-provoking was deemed controversial and rejected by a number of retail stores. Can’t a man sit on a couch with his phoenix? Oh, the days of physical album copies.

Kanye West opened the 2010 BET Awards atop of a mountain to perform, “Power.” This was his first public performance since the infamous VMA mic grab. Decked out in an all-red suit with an oversized sphinx chain, West was back.

Two months later he would close the 2010 VMAs and debut “Runaway,” a tribute to douchbags, that would see the return of The Clipse’ Pusha T.

West launched a weekly free music series to support the album, leading up to the album’s release. 3 of the songs from the series would appear on MBDTF, including “Monster” with an incomparable verse from Nicki Minaj.

West would turn “Runaway” into a 35-minute short film featuring supermodel, Selita Ebanks. The film explored the beauty of a phoenix, attempting to live in society. The album would serve as the soundtrack to the film and part of the film would serve as “Runaway’s” music video.