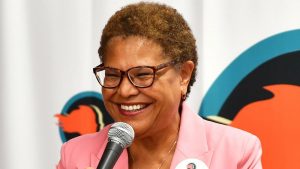 According to CNN, Bass is a six-term congresswoman representing both south and west Los Angeles. Her swearing-in is on Dec. 12.

“As Black mayors continue to win elections this cycle, we are excited that, for the first time, the four largest cities – New York City, Los Angeles, Chicago & Houston – are each led by an African American mayor,” the African American Mayors Association said in a statement.

Phyllis Dickerson, CEO of the African American Mayors Association, notes Black mayors are able to lend their experience to social issues that may have previously gone unidentified by previous regimes.

You can see a report on the election of Karen Bass below.

The post From NY to LA: America’s Four Largest Cities All Have Black Mayors appeared first on The Source.