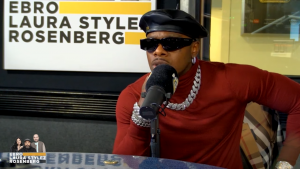 DaBaby recently sat down with Math Hoffa on his My Expert Opinion podcast where he shared a take about himself that is sure to have the hip-hop community buzzing. The North Carolina rapper argued that his rapping abilities was on par with J.Cole, Kendrick Lamar, and Eminem.

“If I don’t feel like you know nothing about this shit, I’m not about to try and exploit my real life anyways, I’m just doing me,” DaBaby said. “So when it come to like pain or anything that affects me or effects somebody I love I couldn’t dealt running round god damn exploiting that shit. I can’t do it.”

DaBaby continued, “Ok you can put this beat on and I’ll go Eminem level on that bitch, you gotta get one of them to come fuck with me. You gotta go get Kendrick Lamar, J. Cole, I don’t wanna disrespect nobody but boy, raise your hand,” Baby said. “I’m like that. Niggas know too and I’m like that for real I don’t gotta talk about nobody else story. I’ll talk about me.”

However, this is not the first time that DaBaby has inserted himself in the G.O.A.T. category. Following a freestyle on L.A. Leakers, DaBaby insited that people put him in the same category with the greats.

“Don’t get it fuckin’ twisted,” he said. “I like to turn people up, I like to make people feel good, but at the same time, you gotta get Kendrick Lamar, J. Cole for me, nigga. Nas, JAY-Z. You gotta go get them ones.”

You can watch the clip below.

The post DaBaby Claims That He’s On J.Cole, Kendrick Lamar, and Eminem’s Level Of Rapping appeared first on The Source.