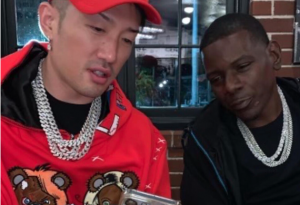 According to several confirmed reports, ATL rapper J Money aka Jermaine Miller, was shot and robbed while sitting in a Rolls Royce Phantom owned by Korean royalty Andrew Lee in the Koreatown section of Los Angeles.

Fox News reported that the shooting took place outside of the luxury apartment complex known as Kurve on Friday (November 18) around 4:20 p.m. It was reported that Money was robbed of his Rolex watch and three chains while sitting in Lee’s Phantom.

Miller was conscious and breathing wen the ambulance arrived, but was listed in critical condition upon his arrival at the hospital.

Police say that two male suspects were involved and fled the scene before police arrived. No motive for the robbery has been discovered and no arrests have been made in connection to the incident.

It’s not yet understood why J Money (aka SauceGod) was in Lee’s car, but it appears the two know one another, with Lee — who also raps under the name KingLee — featuring on J’s latest track, “Dun It All,” which was released on October 28.

J Money, formerly known as J Futuristic, has worked with the likes of Migos, Shawty Lo, Young Buck, Soulja Boy, Boosie Badazz, Young Dolph, Zaytoven and more. He also has a laundry list of criminal charges, including a child molestation charge dating back to 2010.

The post ATL Rapper J Money Shot And Robbed While In Korean Prince’s Rolls Royce appeared first on The Source.