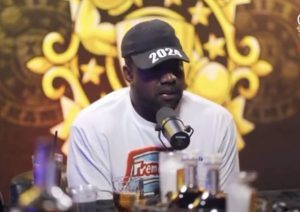 As Twitter sees it’s demise at the hands of Elon Musk, the SpaceX founder and Tesla CEO began to reinstate banned Twitter users. Some of those users reinstated included kickboxer and social media personality Andrew Tate, former President of the United States Donald Trump, and even Kanye West.

While Ye was not completely banned from the platform he was seemingly unable to use his account. On Sunday, Ye jokingly tweeted “Testing Testing Seeing if my Twitter is unblocked.”

He then followed it up a few hours later, tweeting the Jewish salutation “Shalom :)”

The tweet garnered a negative reaction, with many believing Kanye was mocking the Jewish community by tweeting “Shalom” following his antisemitic rants. Elon Musk apparently liked the tweet as well.

Despite his “cancellation,” Ye is still beloved by many of his fans. On Sunday, a video surfaced of inside one of Ye’s design studios. A videographer was apparently taking video from outside when Ye allowed him to come inside and video what was going on. In the view, Ye said that he had taken pieces from Balenciaga, Yeezy Gap x Balenciaga, and the Yeezy Gap collections and plans on reselling the pieces for $20 with “YE24” imprinted on them, signaling his intentions on running for President Of The United States in a couple of years. By the end of the video, Ye even let the videographer leave with a Yeezy jacket.

Ye also made an appearance at Complex Con in Long Beach, CA where fans clamored to get a picture with him.