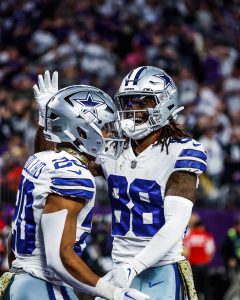 The Dallas Cowboys put a thumping on the Minnesota Vikings. After a fall-apart loss in Green Bay the week before, Dak Prescott and the boys ran all over the questionable Vikes 40-3.

Following the game, Jerry Jones did his customary media availability, and he sees the Cowboys making a playoff run.

“A resounding yes. Yes. Unequivocally,” Jones said to the press. “I think we’ve had adversity. We very easily could have more adversity. Yes, I think if we use the experience of what we’re having in the season, then we’re going to be playoff ready. But I sure do think that what I see out here right now is the team like that you could go get a Super Bowl with.”

The Cowboys are 7-3, second in the NFC East behind the 9-1 Philadelphia Eagles. The team will now get ready for a Thanksgiving battle with another division rival the New York Giants. This will be the first time the two meet on Thanksgiving.

Sunday’s highlights are below.