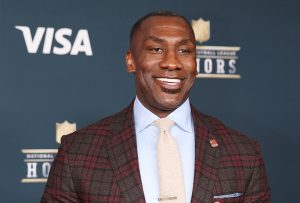 Shannon Sharpe has heard the details about JAY-Z potentially teaming with Jeff Bezos to buy the Washington Commanders, and he is a fan of the idea.

TMZ caught the Undisputed hosted at the airport, who spoke in favor of the move.

Earlier this month, Jeff Bezos was asked about entering a bid for the Washington Commanders with JAY-Z. He played coy, but it definitely sounds like he has an interest.

Speaking with CNN, Bezos didn’t quiet the rumors, instead leaving the moment open-ended when asked about a potential purchase.

“Yes, I’ve heard that buzz,” Bezos said. “I grew up in Houston, Texas, and I played football growing up as a kid… and it is my favorite sport… So we’ll just have to wait and see.”

Last week, JAY-Z and Jeff Bezos were first rumored to team together in purchasing the Washington Commanders.

According to TMZ, Hov has long had an interest in purchasing the team but would need a partner. Bezos also has an interest in the team and has ties to the area as he is the owner of The Washington Post. There is also the deal between Prime Video and the NFL.

On Wednesday, the team’s co-owners, Dan and Tanya Snyder announced they have secured Bank of America to explore transactions of the team.

According to ESPN, the options range from a potential sale of the team to possibly adding minority investors.

“The Snyders remain committed to the team, all of its employees and its countless fans to putting the best product on the field and continuing the work to set the gold standard for workplaces in the NFL,” the team said in the statement.

Alongside the sale is the investigation by Congress of Snyder for the workplace culture under his leadership. That investigation is coupled with one from the NFL for alleged sexual misconduct, which previously resulted in a $10 million fine for the team.

The post Shannon Sharpe on JAY-Z Potentially Buying the Commanders: ‘It’s a Good Look’ appeared first on The Source.