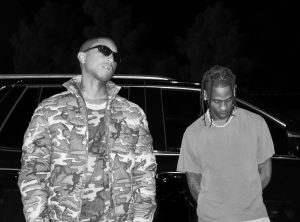 Travis Scott and Pharrell Williams collaborated on the song “Down in Atlanta,” which was released on Columbia Records/Sony Music. This is Pharrell’s second song of the year, following the self-produced hit “Cash In Cash Out,” which is climbing the charts and has received 93M+ streams globally, bringing his total global streams to date to 10B.

Speaking with Apple Music, Pharrell highlighted what it was like to work with Travis Scott.

“When he commits to it, he brings what he brings to it. Because when I played it for him, I wasn’t sure he was in the mood for that, but I knew he could do it, because I made it for him,” Scott said. “But I knew that he could do it, but I just didn’t know whether he was going to be in the mood for that, right? Because a lot of our music is led by mood, and he just dove right in. And we have been on a high ever since he recorded it that night. It’s just something we just listened to over, and over, and over again.

“I wanted to hear him in another space. That’s my job. My job is to push. I think that’s my purpose on this planet, is to push. Push in different categories. Push in design. Push in songwriting. Push in production. Push in innovation. Push not in politics, but push in community and entrepreneurship. And most importantly, push spiritually, and push within myself to be a better person.”

You can hear the single below.

The post Pharrell Williams Collaborates with Travis Scott for “Down in Atlanta” Single appeared first on The Source.