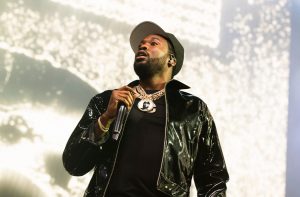 Meek Mill wants to do away with streaming services.

Meek Mill has long been against mainstream labels and modern ways of distributing music, and he’s never shied away from expressing it. He hopped on Twitter Thursday (Nov. 17), announcing that he wants to evade streaming platforms and put his album on JPay or Cash App, saying he wants to earn directly from his records.

“I wanna drop a album on jaypay or cash app,” Meek wrote. “Like I used to sell my shit in the street im not tryna get paid a dollar every 1000 streams lol who made that up tf.”

The Dream Chasers leader also revealed that he won’t add his upcoming project FLAMERZ 5 “on no streaming service” because it’s “strictly underground music.” He also said he doesn’t want Billboard to “rate it” and that he “can make the UnitedStates/world play it with one upload button.”

He added that he’d rather upload the tape on DatPiff, My Mixtape, Soundcloud, and Audiomack since he only made “8cent off every dollar” on stream platforms anyways.

Meek has previously complained about getting under-compensated and not knowing how much his label makes from his albums, and it looks like he maintains his stand. In one of the rants on his series of tweets he launched against the music industry, he claimed that when artists “say they song went 5 times platinum,” he asks them, “how much did that song make in total and how much did you make as the creator?” He continued that “99% of them get stuck.”

The “Blu Notes 2” rapper also dubbed plaques as “a mental trick” to distract artists from asking for the funds they deserve.

The post Meek Mill Wants To Drop His Album on JPay or Cash App Because He Doesn’t Want to ‘Get Paid a Dollar Every 1000 Streams’ appeared first on The Source.