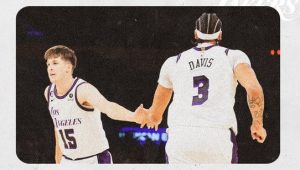 Anthony Davis became the third Los Angeles Lakers big man to score 30 points and had over 15 rebounds in three consecutive games as he led the LakeShow to a 123-92 blowout of the San Antonio Spurs. It was the third win in a row for the Lakers, who are looking to turn the corner after a slow start.

Davis averages 35 points on 62% shooting during the streak, along with 17.3 rebounds. After the game, Davis spoke to ESPN and revealed he is trying to fill in while LeBron James is out.

“Obviously, when he’s out, or if I’m out, we take it upon ourselves to kind of, as much as we can, fill that void,” Davis said.

Aiding AD in the Lakers’ win was Russell Westbrook, who scored 10 points and had ten assists as he continues to shine in a sixth-man role. Dennis Schroder and Kendrick Nunn added 13 a piece, while Lonnie Walker IV had 14. LeBron James sat out his fourth straight game with a groin injury.

Devin Vassell led the way for the Spurs with 17 points.

The Lakers will see the Spurs two more times this week as they play in San Antonio in a back-to-back on Black Friday and Saturday. On Tuesday, they will travel to Phoenix for a game with their division rival Suns.

Across the state, in Houston, Klay Thompson blasted back at fans and critics who claimed he was washed. In an impressive shooting display, Klay Thompson exploded 41 points, including 10 3’s, as the Warriors pulled out a 127-120 game for their first road victory.

“It’s just something f”r me to build on,” Thompson said. “I was really wanting a game like this, so it felt great for me to just l”t that thing fly.”

Adding to the onslaught of buckets was Steph Curry, who added 33 points on 11 of 20 shooting, including 7 of 14 from 3. As a part of his performance was the nuts bomb below.

Kyrie Irving returned to the court in Brooklyn as the Brooklyn Nets outlasted the hobbled Memphis Grizzlies. Irving, who had support from members of the Black Israelites outside of Barclays Center, wanted to keep a post-game conversation about what happened on the court.

On the court, Ben Simmons continues to make strides scoring 22 points with five assists and eight rebounds, an important perSimmons’sahead of Simmons’s first game back in Philadelphia. That game will be Tuesday on TNT. Kevin Durant added 26 points, seven assists, and seven rebounds in the win.

Additional scores are below: