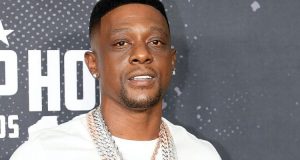 Last week, Donald Trump announced his 2024 presidential bid. During his speech in front of his passioned supporters, one thing that caught the media’s attention was his suggestion that drug dealers receive the death penalty.

Trump vowed to “wage war upon the cartels and stop the fentanyl and deadly drugs from killing 200,000 Americans per year.” He added, “We are going to be asking everyone who sells drugs, gets caught selling drugs, to receive the death penalty for their heinous acts.”

Boosie Badazz caught wind of the former POTUS’s remarks, and reacted, asking Trump if he is going to keep the same energy for White cops that kill innocent Black men.

Boosie recently had a couple of run-ins with Georgia police just this year. He and the driver of the car were pulled over on a Georiga highway for illegal tints. Officers stated that they smelled weed from inside the car and proceeded to search the car, where they found weed and a bag of money.

This prompted Boosie to go off on the officers while they searched his car. Footage from the traffic stop went viral on Twitter.

In another run-in with the police, Boosie was pulled over and performed an impromptu version of his hit song “Set It Off” while his car was being searched.

The post Boosie Reacts To Donald Trump Wanting The Death Penalty For Drug Dealers appeared first on The Source.