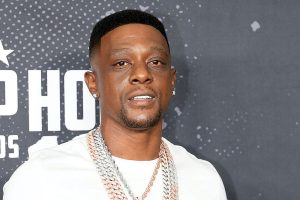 Boosie Badazz wants to drop the visuals for his tribute song to Takeoff, “Rocket Man,” but he needs Elon Musk’s help. In a clip shared online on Thursday (November 17), Boosie asked Musk to lend him one of his Space X rockets to shoot the music video.

“Elon Musk, I’m tryna see if you can let me use one your rockets,” Boosie began before explaining that he needs it “to shoot my ‘Rocket Man’ video.”

He continued, “We was all discussing it down like, Elon Musk really you’re a dude. I’m trying man, Elon Musk if you can help me with the ‘Rocket Man’ video. Help me get a scenery good for it or whatever you can do to help. They say you got rockets so I’m leaving a number on this drive for Elon Musk and his staff to try to help us out. ‘Rocket Man’ video on the way.”

He also announced on Twitter that he also “need a space place” for the shoot.

The Baton Rouge artist released “Rocket Man” on November 14, shortly after he previewed it on social media. The track is a tribute to the late Migos rapper Takeoff, who was murdered in Houston on November 1. On the record, the 40-year-old rapper speaks on the violent deaths rappers have been falling victim to, as well as paying homage to Takeoff and Migos.

“We used to be heroes, no they shoot us down like free throws, like killing a rapper a cheat code. Popping perks is cooler than selling kilos. Women showing too much looking like cheap h**s. And I hope you know what she know they gone try to take you before Takeoff, Long Live Migos… Rocket Man,” Boosie spits.

Shortly after Takeoff passed away, Boosie took to the internet to share the same message about rappers being targeted. “This rapper shit whack, man,” he declared in a clip. “I don’t even want to be looked at as a no rapper no more. I’m an entrepreneur, man. This rapper shit whack. They don’t want rappers to live, bro. Everybody want our place and shit. We in danger right now, bro. We used to be heroes.”

Boosie was later joined by Gucci Mane, who also released his song dedicated to Take titled “Letter To Takeoff.”