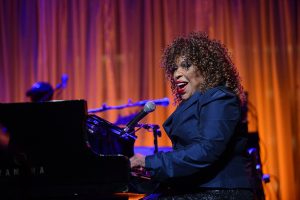 Iconic singer Roberta Flack has been diagnosed with ALS, also known as Lou Gehrig’s disease. The illness has made it impossible for the 85-year-old singer to sing and also is restricting her speaking ability.

The ALS, formally known as amyotrophic lateral sclerosis, the diagnosis comes just ahead of the Roberta documentary that will premiere Thursday at DOCNYC.

Flack is known for performing “Killing Me Softly With His Song” and “The First Time Ever I Saw Your Face.” She is a Grammy award-winning singer and pianist who “plans to stay active in her musical and creative pursuits” through her eponymous foundation and other avenues.

The post Roberta Flack Diagnosed with ALS, No Longer Able to Sing appeared first on The Source.