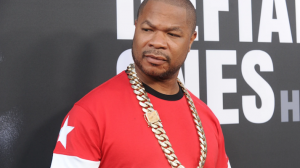 Divorces can be messy. For celebrities, they can be even messier. For rapper Xhibit, the outcome can be quite costly.

While the courts had ordered Xhibit to pay his ex-wife Krista Joiner $2,239 per month in child support for their 10-year-old son Gatlyn (a sum to which he agreed), she says that is not enough and that she deserves half of the value of his current assets.

The disagreement stems from what Joiner claims was a verbal agreement with Xhibit saying that he claimed that he would provide her (Joiner) with lifelong financial support as long as she stayed at home and took care of the household and their son.

Court documents filed by joiner allege that a verbal agreement stated that, “in the event the parties’ relationship ended, all of the property acquired, or entities or businesses established, or which property or entities/businesses increased in value, during their relationship as a result of (Xzibit’s) skills, efforts, labor, and earnings, regardless of how the title was formally held, would be divided equally between them.”

The lawsuit also claims that Xhibit agreed that all property and businesses would be split upon their divorce.

This is not the first court case for the former couple, who officially divorced in 2021. In July, a judge ordered Xhibit to pay Joiner $50,000 in fees to a forensic accountant for the auditing of his finances as well as $125,000 for court and legal costs. Joiner also kept the $3 million home that she shared with the former Pimp My Ride host. In 2021, Joiner allegedly forged Xhibit’s name on a check to make a down payment on a Bentley. Upon finding out, he simply asked her to return it rather than filing charges. (It was eventually repossessed several months later.)

However, Xhibit claims that no such agreement was made, and instead, he states that his ex-wife should obtain a job. According to Yahoo news, he has formally petitioned the court to to order Joiner to undergo a vocational evaluation with a court-appointed official. The evaluation will determine if Joiner is mentally and physically fit to work “as well as her available employment options.” After the evaluation is conducted, a judgment on the amount of spousal support she should receive will be granted.

It is unclear what, if any, skills Joiner (who is almost 50 years old) has in the way of finding gainful employment. However, the courts also usually provide references for vocational training if the courts recommend it.

The post Xzibit Petitions to Deny Ex-wife lifetime spousal support, says she should work instead appeared first on The Source.