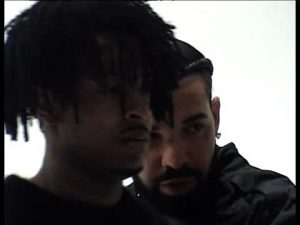 “Rich Flex” is going up all over the world. In the official video, Drake and 21 Savage give a behind-the-scenes look at their lives, including partying with other celebrities and athletes.

In the new video, the entire lives of 21 and The Boy is a flex. Scenes include courtside at a Toronto Raptors game, moments at Jack Harlow’s tour, strip club adventures, and more.

Drake and 21 Savage impacted the charts, but it wasn’t enough to take the top spot on the Hot 100 as Taylor Swift hung on.

The Her Loss album from the rap duo launched eight singles into the top 10 of the Hot 100, taking up 2-9 spots.

The achievement makes Drake the only artist to land eight songs in the top 10 twice. According to Billboard, he now has 67 career top 10 hits.

The list of Her Loss songs to make the Top 10 is below:

READ MORE: 21 Savage Says ‘Her Loss’ Album Wasn’t Pushed Back After Takeoff’s Death to Give Fans’ Something to Look Forward To’

Drake would have a bit of fun with Swift still holding No. 1.