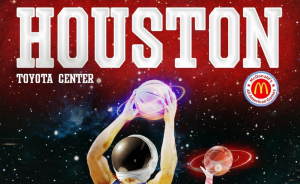 The McDonald’s All American Games are headed to Houston. The Clutch City will be host to the games as they are played on March 28 at Toyota Center and highlight the rising set of stars.

The All American Games will add to the legacy of Texas basketball, which has already produced 135 McDonald’s All Americans, 23 of that number are from Houston. For the 2023 game, 48 new girls and boys will join the legion of hoops stars.

“The McDonald’s All American Games represent more than one night of basketball. It’s a chance for elite players to show out on the national stage and create their own legacy,” said Elizabeth Campbell, Senior Director of Cultural Engagement, McDonald’s USA. “Houston breathes culture with its diversity and rich basketball history. And this March, the city will serve as the perfect backdrop to host the next generation of basketball stars at Toyota Center.”

“We’ve got the best high school players coming to town this March and you know Toyota Center is gonna be hype,” said Houston Rockets star Jalen Green. “To have been named a McDonald’s All American, to play for the Rockets and now have the Games come to Houston is so special.”

Tickets for the game will go on sale beginning in late January at ToyotaCenter.com.