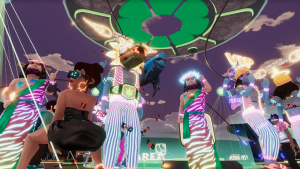 LimeWire made a spectacular debut in Decentraland as one of the main stages at the Metaverse Music Festival in Decentraland this past week. The LimeWire stage hosted heavy-hitting headliners like Soulja Boy, A$AP TyY, Quincy, and Elijah Blake, as well as many other talented artists like EscapePlan, Lil Bitcoin, Orrin and more. In all, it included 17 artists, 4 days, and 927 minutes of exclusive performances and music.

In addition to the mesmerizing live shows, LimeWire’s digital merch collection was ranked as one of the top 5 creators on Decentranland last week with LimeWire exclusive digital sneakers being the 3rd most sold item, and over 3,000 LimeWire glasses have been claimed by attendees. The Main Stage hosted a dedicated VIP area for the holders of the LimeWire Originals NFT collection and special guests, as well as the artist merchandise available on site.

Set in an otherworldly cyberpunk landscape being reclaimed by nature, the Festival has featured 15 uniquely designed stages that hosted performances from 180+ musical artists from across a wide variety of genres, as well as new interactive experiences.

The post Soulja Boy Is “First Rapper To Perform Live In The Metaverse” Through LimeWire’s Debut Decentraland appeared first on The Source.