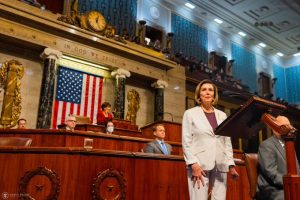 Nancy Pelosi’s run as the Democratic Party’s chamber leader in the House of Representatives will come to a close. In a Thursday (Nov. 17) announcement, Pelosi stated she will not seek re-election.

“With great confidence in our caucus I will not seek re-election to Democratic leadership in the next Congress,” Pelosi said, according to NBC News.

The Republican Party flipped control of the House of Representatives in last week’s midterm election.

The husband of Hosue Speaker Nancy Pelosi, Paul Pelosi, was “violently assaulted” by a home intruder two weeks ago.

According to ABC News, a suspect is in custody after entering the Pelosi’s home. 82-year-old Paul Pelosi suffered “significant” injuries.

The suspect entered the Pelosi home through the side door with a hammer. The suspect was reportedly looking for the House speaker, who was in Washington D.C., with her protective detail.

The post Nancy Pelosi Will Not Seek Re-Election as Democratic Leader in Congress appeared first on The Source.