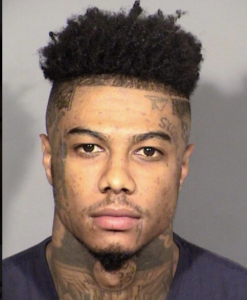 In a new video obtained by TMZ, Blueface is seen shooting at the driver of a truck on Oct. 8, which led to his arrest earlier this week.

In the video, Blueface stands outside a Las Vegas club when a truck pulls up on him and his crew. The truck speeds off, with Blueface firing as it moves.

People at the club state that before the shooting, the truck driver was in the club and was attacked by Blueface’s crew. He pulled up on the crew after and asked, “Who hit me?!” leading to the gunshots.

Earlier this week, in a video obtained by TMZ, Blueface was tackled and arrested outside Lo-Lo’s Chicken & Waffles in Las Vegas.

The arresting officers were in unmarked cars and plain clothes. Between six and eight officers arrested the rapper, piling on top of him as a crowd, including his girlfriend Chrisean Rock, looked on.

The officers stated they were executing an open warrant for Blueface’s arrest. He was arrested for attempted murder with the use of a deadly firearm or tear gas. In addition, Blueface is charged with discharging a gun into a house, building, vehicle or craft. The incident in question occurred on Oct. 8.

You can see the arrest footage below.