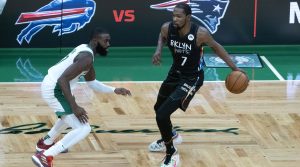 Over the summer, Kevin Durant requested a trade to leave the Brooklyn Nets before ultimately staying with the team. Since then, the Nets have had a poor season, including firing former head coach Steve Nash and Kyrie Irving being wrapped up in an anti-semitism controversy.

Following a blowout loss to the long-lowly Sacramento Kings on Tuesday, Durant spoke with Bleacher Report‘s Chris Haynes and detailed why he wanted the trade, and revealed that it wasn’t a difficult decision.

“It wasn’t difficult at all to request a trade because it was about ball,” Durant said. “I went to them and was like, ‘Yo, I don’t like how we are preparing. Don’t like shootarounds. I like practices. Need more. I want to work on more s–t. Hold me accountable. Get on my ass in film if that’s going to help you get on everybody else’s head. I want to do more closeouts. I want to work on more shell drills at practice.’”

KD detailed the process was in hopes of making everyone’s life easier.

“This was the type of s–t I was coming at them with. It wasn’t like, ‘Yo, y’all need to make sure everybody around me can make my life easier.’ Hell nah, I want to make everybody else’s life easier. Ask Steve Nash, you can go call him right now. I would say, ‘Yo, I need more closeout drills. We need to practice more.’ That’s what I was on.”

The Nets will take on the Portland Trailblazers as they continue a west coast swing on Thursday (Nov. 17).

The post SOURCE SPORTS: Kevin Durant Opens Up About Summer Trade Request, Says It Was About Ball appeared first on The Source.