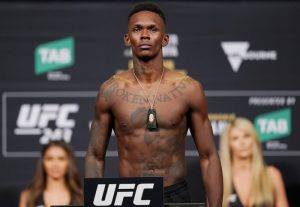 Israel Adesanya was arrested at JFK airport on Wednesday for criminal possession of a weapon. Arrested days after losing at UFC 281, Adesanya was nabbed at TSA, attempting to pass through with metal knuckles.

According to TMZ, taking brass knuckles in your carry-on bag is illegal, but there are no specific details as to where Adesanya had the knuckles stored.

Israel was handed a gift by a fan, which he put in his luggage,” Israel Adesanya’s manager, Tim Simpson, said to TMZ. “When flagged at the airport, Israel quickly disposed of the item, and cooperated with authorities. He has complied accordingly, with that the matter was dismissed and he is on his way home.”

The post SOURCE SPORTS: Israel Adesanya Arrested for Possession of Brass Knuckles at JFK Airport appeared first on The Source.