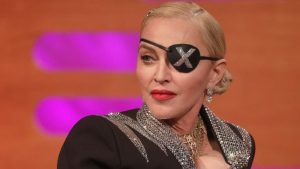 50 Cent and Madonna have been going at it for a while now. The beef might have started years ago, but 50 has taken time to publicly insult Madonna on social media numerous times in recent years. Just last week, the two were at it again after Madonna posted a video of herself singing along to a Baby Keem song, which caught the attention of 50.

It seems Madonna has gotten tired of this back and forth between her and 50, and recently took to social media to issue a PSA to the Get Rich Or Die Tryin’ rapper to ask him to stop bullying her for simply enjoying her life.

“Stop Bullying Madonna For Enjoying Her Life,” Madonna wrote on her IG story, seemingly responding to her back and forth with 50 Cent.

Just last year 50 publicly apologized to Madonna for things he had said about the Pop legend after she posted pictures of herself under a bed on Instagram.

“That’s Madonna under the bed trying to do like a virgin at 63. She shot out, if she don’t get her old ass up. LMFAO,” 50 said in response to the pictures. Madonna then took to her IG story where she posted a picture of the two of them with the message: “Here is 50 Cent pretending to be my friend. Now you have decided to talk smack about me. I guess your new career is getting attention by trying to humiliate others on social media. The least elevated choice you could make as an artist and an adult.”

50 apologized to Madonna shortly after. “I must have hurt Madonna feelings, she went and dug up a [sic] old MTV photo from 03. Ok Im sorry i did not intend to hurt your feelings.I don’t benefit from this in anyway. I hope you accept my apology.”

However, 50 still continues to get under Madonna’s skin, despite havign apologized.

The post Madonna Asks That 50 Cent Stop Bullying Her appeared first on The Source.