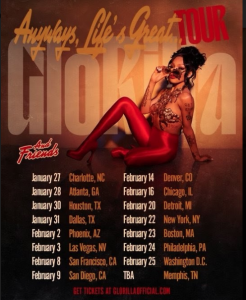 Today, rising Memphis star GloRilla announces her first ever headline tour in support of her debut EP, “Anyway, Life’s Great…”. Kicking off on January 27th in Charlotte, NC this tour will be an opportunity for fans to experience the EP and Glo’s infectious energy live. Tickets go on-sale to the public this Friday, November 18th at 10am local time. More information can be found HERE. ANYWAY’S, LIFE’S GREAT TOUR DATES:

Today’s announcement comes on the heels of GloRilla’s fist ever Grammy Nomination for Best Rap Performance and multifaceted debut EP, Anyways, Life’s Great…. Listen HERE via CMG/Interscope Records. Including the smash hits “F.N.F. (Let’s Go)” and the Cardi B-assisted “Tomorrow 2,” the nine-song set confirms Glo as not only one the premier talents in a crowded local scene, but one of the most magnetic, versatile young rappers in the industry at large.   Anyways, Life’s Great… comes in the wake of “F.N.F.,”Glo’s breakout single from earlier this year. Over a spare instrumental, the North Memphis native not only celebrates her newfound freedom—“I’m S-I-N-G-L-E again,” she raps during the hook, “hanging out the window with my ratchet-ass friends”—but makes each boast, joke, and aside feel like an act of invention, the record a steady IV drip of Glo’s charisma. Glo followed “F.N.F.” with a run of singles that showcased her remarkable versatility, including the skeletal “Blessed,” the taunting “Nut Quick,” and “Tomorrow 2” — all of which are housed on this EP. But Anyways, Life’s Great… probes even deeper, tapping into the furthest depths of Glo’s psyche, from the harrowing opener “No More Love” to “Out Loud Thinking,” which closes the record with the most revealing lyrics in the young rapper’s catalog to date.  Despite being just 23 years old, Glo brings to the table a lifetime’s worth of experience. Raised in a religious family in North Memphis—where she sang in the church choir but was forbidden from listening to rap music—Glo developed a unique musical perspective. Before being earmarked as a future superstar by Yo Gotti, who signed her to his CMG imprint, Glo learned how to translate her vibrant personality and unmistakable drawl into one of the most irresistible on-record personas to emerge in recent memory.