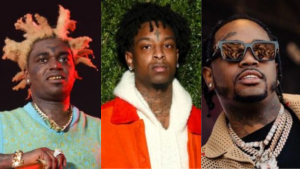 His remarks have caught the attention of both newer rappers and veteran rappers. Recently Kodak Black and Fivio Foreign have called out 21 for his remarks, saying that the Her Loss rapper is wrong about his statements and should not disrespect a legend of Nas’s stature.

Fivio Foreign even chimed into the conversation, backing Nas and saying that the legendary rapper got a Grammy for Kings Disease II, which Fivio himself was featured on.

“That nigga Nas did too much to be disrespected like that. That’s big bro where I’m from you know what I’m saying. I was just on his album. He just got a Grammy for the album I just was on.”

The post Fivio Foreign And Kodak Black Call Out 21 Savage For Controversial Nas Comments appeared first on The Source.