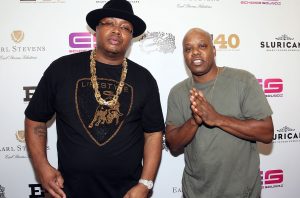 Bay Area legends E-40 and Too $hort recently penned an op-ed in The Atlantic calling for the hip-hop community to have an intervention to end the senseless violence that has taken the lives of multiple rappers in the last few years.

The op-ed entitled “Hip Hop Needs An Intervention” asks the question “Who’s Next” due to the frequent nature of the killings. They compared the inner city, where many rappers come from, to a MMA octagon, but despite this, there still remains hope in these communities.

“The inner city is like the MMA Octagon—it’s the cage, the trap,” they wrote. “A lot of violent shit goes down, but it’s still home for many hip-hop artists. And there’s still a lot of hope, hunger, and love in the streets. We just need to find better ways to support each other. This is our generation’s responsibility as much as it is for the young MCs.

40 and $hort believe that social media is largely to blame for the uptick in violence in the hip-hop community and essentially want rappers to stop flexing and showing off their money on Instagram. They believe that doing this makes them a target.

“One reason the violence has gotten worse is social media. Rappers are trying too hard to flex online to the detriment of their safety. These dudes are getting money at a faster rate than we ever did. We’ve been to the strip club when a rapper was sitting with walls of money—like, walls: Each stack was three feet tall.

“How can you throw that much money in one night? We have no idea. Some of these artists spend thousands on an outfit and millions on jewelry, then jump in their Bugatti or whatever and show off so much money that they can barely hold it in their hand for an Instagram photo.”

Elsewhere in the op-ed, Too $hort recalled when he had seen 2Pac just hours before he was shot in Las Vegas.

“I saw 2Pac the night he got shot in Vegas,” he said. “It was probably about a couple of hours, maybe, before it happened. I went to the fight, it was one of those classic Mike Tyson fights. He knocked him out in like 90 seconds. I was staying at the Luxor, and we were going in the hotel, and 2Pac, Suge and small little entourage, they was leaving.:

“We stopped and talked for a minute or so, and he said, ‘We about to switch up the fits and head to Club 662. It’s going to be open mic and everybody’s going to get on the mic.’ I said cool, ‘We’re going to be there.’ He never made it.”

You can read the full piece here.

The post E-40 And Too $hort Pen Powerful Op-Ed: “Hip Hop Needs An Intervention” appeared first on The Source.