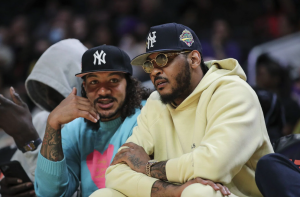 According to several confirmed reports and an announcement made on Sunday, Kiyan Anthony, the 15-year-old son of NBA star Carmelo Anthony and his ex-wife LaLa, has received a scholarship offer from his father’s alma mater, Syracuse University.

Kiyan Anthony is the No. 62 overall recruit in the class of 2025, but he’s better known as the son of Carmelo Anthony. The 6’3 guard from Christ the King High School in Queens has been accumulating mid-major offers as he starts his sophomore year and was already able to count Memphis and Penny Hardaway among his future college prospects. The junior Anthony confirmed the offer via his Twitter page.

His NBA dad led Syracuse to the national championship in 2003 as a freshman phenom on his way to winning the Final Four Most Outstanding Player award.

Anthony is still only 15 years old, and could still be a couple years away from making his commitment, however, carrying on his father’s legacy on the court for the Orange is a start to his basketball career that even his future fans are anticipating to see.