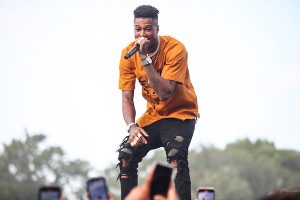 Blueface has been arrested for attempted murder. In a video obtained by TMZ, Blueface was tackled and arrested outside Lo-Lo’s Chicken & Waffles in Las Vegas.

The arresting officers were in unmarked cars and plain clothes. Between six and eight officers arrested the rapper, piling on top of him as a crowd, including his girlfriend Chrisean Rock, looked on.

The officers stated they were executing an open warrant for Blueface’s arrest. He was arrested for attempted murder with the use of a deadly firearm or tear gas. In addition, Blueface is charged with discharging a gun into a house, building, vehicle or craft. The incident in question occurred on Oct. 8.

You can see the arrest footage below.

The post Blueface Arrested in Las Vegas for Attempted Murder appeared first on The Source.