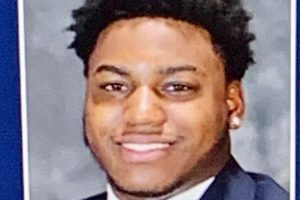 During the news segment, Jones Sr. said he had recently seen his son and stated he was acting normal and “doing real well” despite having some school issues.

“He had some problems,” Jones Sr. said. “The last time I talked to him, he said some people was picking on him or whatever. He didn’t know how to handle it. I just told him, ‘Go to school. Don’t pay them no mind. Do what you got to do.’”

Jones Sr. said he did not have full detail of the issues but was surprised to learn what his son has done.

Law enforcement arrested Jones Jr., who was listed as a freshman running back in 2018, on Monday (Nov. 14).

According to ESPN, the killed players are wide receivers Lavel Davis Jr. and Devin Chandler and linebacker D’Sean Perry.

The shooting reportedly occurred in a parking garage on campus around 10:30 p.m. ET. Jones is described as a Black man in a burgundy jacket or hoodie, blue jeans, and red shoes. He is considered armed and dangerous and was noted to have been riding in a black SUV with Virginia plates.

“As of this writing, I am heartbroken to report that the shooting has resulted in three fatalities; two additional victims were injured and are receiving medical care,” university president James E. Ryan wrote. “We are working closely with the families of the victims, and we will share additional detail as soon as we are able.

“Our University Police Department has joined forces with other law enforcement agencies to apprehend the suspect, and we will keep our community apprised of developments as the situation evolves. This is a message any leader hopes never to have to send, and I am devastated that this violence has visited the University of Virginia.”

The post Alleged UVA Shooter’s Father Says His Son ‘Had Some Problems’ at School Prior Shooting appeared first on The Source.