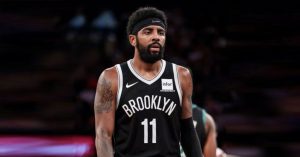 Following a suspension, loss of endorsement deals, and more, Kyrie Irving has issued a new statement on Twitter. His Monday tweet stated he is sidestepping any “religious/political wars.”

“I was not put here on earth to participate in any religious/political wars or incite racial disharmony/prejudice within communities,” Irving wrote. “We are all equal under the sun and I am here to participate in the building of an Equal world and follow the Word from the Most High/GOD/YAH.”

Last week, after condemning Kyrie Irving’s comments in a postgame conference, LeBron James elaborates on his beliefs regarding the antisemitic matter.

“I don’t condone any hate to any kind, to any race… You guys know where I stand,” James said in his conference. “He apologized, but he caused some harm. I think it’s unfortunate. I don’t stand on the position to harm people when it comes to your voice or your platform.”

Hitting Twitter, Bron revealed that while he stands against hate speech, he feels the steps laid out for Irving to continue are unfair.

“I told you guys that I don’t believe in sharing hurtful information,” LeBron wrote. “And I’ll continue to be that way but Kyrie apologized and he should be able to play. That’s what I think. It’s that simple. Help him learn- but he should be playing. What he’s asked to do to get back on the floor I think is excessive IMO. He’s not the person that’s being portrayed of him. Anyways back to my rehab session.”

In order for Irving to return to the Nets, the organization listed six requirements for him to fulfill.

After his suspension was issued, Irving issued an apology.

“To All Jewish families and Communities that are hurt and affected from my post, I am deeply sorry to have caused you pain, and I apologize. I initially reacted out of emotion to being unjustly labeled Anti-Semitic, instead of focusing on the healing process of my Jewish Brothers and Sisters that were hurt from the hateful remarks made in the Documentary. I want to clarify any confusion on where I stand fighting against Anti- semticism by apologizing for posting the documentary without context and a factual explanation outlining the specific beliefs in the Documentary I agreed with and disagreed with. I had no intentions to disrespect any Jewish cultural history regarding the Holocaust or perpetuate any hate. I am learning from this unfortunate event and hope we can find understanding between us all.”

You can see his full statement below.

The post SOURCE SPORTS: Kyrie Irving Tweets He is Not On Earth to ‘Participate in Any Religious/Political Wars’ appeared first on The Source.