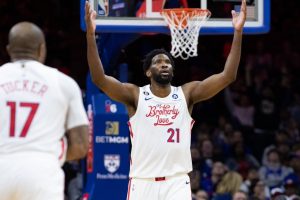 Joel Embiid is on an absolute tear. The Philadelphia 76es big man is making up for the absence of James Harden. His latest performance was a 59-point effort against the Utah Jazz.

“This is not about me,” Embiid said to ESPN. “We did it as a team. Obviously, the coaches put me in those positions and my teammates fed me the ball.

“I thought we had great spacing around everything we were doing. … Like I said, all the credit goes to my teammates.”

ESPN Stats and Information notes Embiid is the first player to outscore both teams by himself in a fourth quarter (26-21) since Tracy McGrady in 2006. Embiid is also the fourth player — along with Kobe Bryant, Michael Jordan, and Bradley Beal — to score at least 100 points across a back-to-back since the NBA-ABA merger.