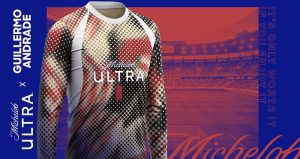 Renowned streetwear designer Guillermo Andrade teams up with Michelob Ultra to create a custom jersey prior to the start of The World Cup. Every four years the greatest soccer (fútbol) players in the world represent their respective countries and compete at The World Cup. While the athletes train to compete at the highest level, they want to be dripped out while so in their jerseys. World Cup jerseys are symbols of pride, unity, and some of soccer’s most iconic moments. Guillermo Andrade’s intended to align his creation with his newest collaboration.

“The mission was to capture unity and how the game (of soccer) brings people together,” says Andrade. “That’s the sport that I associate my brand with the most. “The bi-product of the unity that the game bring is enjoying a drink with your buddies or other fans. The World Cup brings that out of people.

Guillermo Andrade, whose designs have been seen on the likes of Kendrick Lamar, The Weeknd, Kylie Jenner and manny more, has a love for soccer that stretches far beyond his recent collaboration with Michelob ULTRA. He even played for a soccer club for 8 years as a youth in Marin County, Ca and in college.

“I took this opportunity to highlight both the American and Mexican flags,” said Andrade. “It was important to use the Mexican flag because Mexico has represented the Central American community on the World Cup stage at large.”

The limited edition jersey draws inspiration from Michelob ULTRA’s World Cup TVC honoring the legacy of the game and camaraderie it brings amongst fans around the world.

“Imagine being at a pub in a city you’re not from and seeing someone wearing the jersey,” Andrade says. That’ll be an exiting moment that I know I’ll enjoy. That lets me know that the product did the work.”