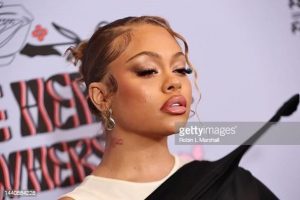 The first Give Her FlowHERS Awards Gala was held at The Beverly Hilton in Los Angeles on Friday, Nov. 11, 2022. The event was hosted by Femme It Forward, the ground-breaking female-led music and entertainment corporation encouraging creative and outstanding female visionaries. The star-studded red-carpet event, which brought together a variety of notables, musicians, influencers, executives, and tastemakers, honored women in entertainment who empower, uplift, and inspire.

During the Gala, Latto was honored with The Big Femme Energy Award, celebrating her impact on music for the current generation. The award was presented by performer, songwriter, and artist Sevyn Streeter.

You can see images of Latto from the event below.

The post Latto Honored with Big Femme Energy Award at ‘Give Her Flowhers’ Gala appeared first on The Source.