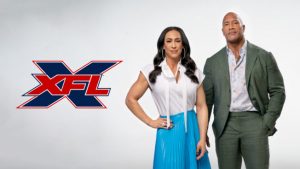 XFL Draft Week is set to be held November 15-17 at the UFC APEX facility in Las Vegas, Nevada. XFL Ownership led by Dany Garcia, Dwayne “The Rock” Johnson, Head Coaches and league football operations will all be in attendance for the inaugural event.

This week’s activities will kick off on Tuesday, November 15, at 11 am PT/2 pm ET with a live-streamed Quarterback Selection Show, hosted by ESPN’s Stormy Buonantony. During the show, XFL Head Coaches will officially announce their team’s quarterbacks.

According to XFL.com, the league and team personnel have evaluated nearly 6,000 players at XFL showcases, NFL training camps, and tryouts. The top prospects from these evaluations have been invited to enter the XFL Draft pool of 1700 players vying for 528 spots in training camp and 400 active player roster spots.

“Sometimes in life all you need is one shot to prove yourself and the XFL provides that chance,” added Owner Dwayne Johnson. “These players have been working hard and beating the odds. We have seen their passion at the showcases, we have seen their commitment to the game, and now we – as owners, coaches and trainers – are in a position to take their game to the next level. I know we have some electrifying ballers in the player pool and I can’t wait to see them all on the field balling out come training camp in January.”

The events in Las Vegas will continue as the League kicks off two days of Draft action, where Head Coaches will make position selections alongside Directors of Player Personnel.

Russ Brandon, President of the XFL, added, “This is a historic moment for the XFL, as we continue to build our League with our players as the core of our unique football ecosystem.  Our league’s executives, coaches and their staff have worked tirelessly to prepare for the Draft, and I am thrilled to see these teams come together for our fans and the organization. As our kickoff approaches in February, we’re excited to showcase our tremendous athletes and high-caliber coaching staff to bring a high level of play and excitement for our fans.”

The post Dany Garcia, Dwayne “The Rock” Johnson’s XFL Draft Week To Be Held In Las Vegas appeared first on The Source.