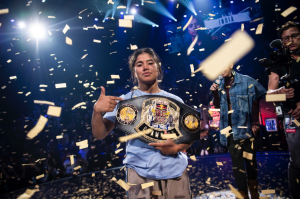 On Saturday, November 12th, B-Girl India and B-Boy Victor were crowned champions of the 2022 Red Bull BC One World Final. Hosted at Hammerstein Ballroom at Manhattan Center in New York City – the birthplace of hip-hop and break – the competition brought together the world’s top breakers to battle it out amongst a sold-out crowd and fans who tuned in from all corners of the globe.

Broken down into two brackets of Top 16 B-Boy and Top 16 B-Girl battles, the Red Bull BC One World Final featured an international line-up of elite competitors including country champions and world-class wildcards. Competitors were judged by a panel of legendary breakers, Ayumi, FaBGirl, Kid Glyde, Jey and Sick.

Following a fierce bracket of 16 one-on-one B-Girl battles, India, commanded the floor and was declared the B-Girl World Champion. The Netherlands-based B-Girl went head-to-head with 2021 Red Bull BC One World Champion Logistx, making history as the first Dutch B-Girl to ever win the World Championship title, as well as the youngest at just 16 years old.

B-Boy Victor dominated the B-Boy bracket, winning over the judges against B-Boy Lee in an intense final battle. This is the second time the 28-year-old B-Boy, who hails from Kissimmee, Florida, has taken home the Red Bull BC One World Finals title, having won the competition previously in 2015 when the event was held in Rome, Italy.

B-Boy Victor said on winning his second title: “It feels like a dream, to be honest. I can’t believe I won again. I wanted to prove to myself that I can do it again.”

The 2022 Red Bull BC One World Final paid tribute to the roots of hip-hop and break by taking the competition back to New York City for the first time since 2009. Special performances were put on by New York legends Grandmaster Caz and Rakim, both artists who were instrumental in the hip-hop movement born out of the Bronx. Fans enjoyed additional performances by Queens hip-hop duo Black Sheep and revolutionary dance crew, the Jabbawockeez.

This year also marks the first time in Red Bull BC One history that the competition aired on ESPN+ with a 2-hour highlight recap airing on ESPN on Sunday, November 13th at 9:30 PM ET / 6:30 PM PT. The full livestream is now available on Red Bull BC One YouTube, Red Bull BC One Facebook and Red Bull TV.

Meet the 2022 Red Bull BC One World Champions:

India Sardjoe, aka B-Girl India, was born and raised in The Hague in Holland. The Dutch B-Girl began her dance journey by taking hip-hop classes, then switching to breaking at the age of seven. Her confidence, which she credits to playing soccer on an all-boys team, quickly helped develop her breaking skills and master some of the most challenging power moves possible. India soon carved out a name for herself in the breaking scene, placing second in her first battle at nine years old.

A member of the Heavyhitters Crew and Hustlekidz, India’s signature style is defined as powerful, creative, and dynamic, with all-around flows.

Victor Montalvo, known as B-Boy Victor, has built a career as one of the best breakers in the world. He entered his first battle when he was 14 years old and had his first milestone win when he came out victorious at the 2011 Red Bull BC One Cypher Tampa.

Victor’s title wins include the 2015 Silverback Open championships (which he also won again in 2018), the 2015 Red Bull BC One World Finals, winning the Undisputed World B-Boy Series in 2015 and 2017, and winning Outbreak Europe in Slovakia in 2017 and 2019.  He has also won the 2019 World Urban Games in Budapest, Hungary, and the 2021 WDSF World Breaking Championships in Paris, France.

Victor is a member of Squadron, MF Kidz, Red Bull BC One All Stars, and Back Yard Funk. His signature moves include his one-hand spin, which he calls the Super Montalvo, and his back-flip-into-flare combo.

The post 2022 Red Bull BC One World Champions B-Girl India and B-Boy Victor Take Home The Crown appeared first on The Source.