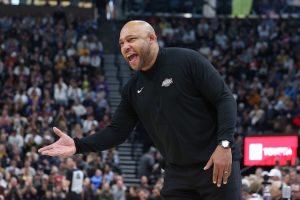 With the Los Angeles Lakers in a 2-8 hole and sitting second to last in the Western Conference, head coach Darvin Ham remains steadfast in a turnaround for this season.

Following a 139-116 loss to the Utah Jazz without LeBron James, Ham spoke to the media and told them to quote it.

“I would say this, man. And write it, quote it, however,” Ham said, according to ESPN. “This may be happening now at the outset of what we’re trying to force to be a culture change in terms of getting us back to being highly competitive on a highly consistent basis, but it’s not going to always be like this.

The Lakers will suit up again to play the Los Angeles Clippers on Wednesday on ESPN.