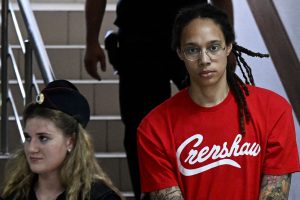 Brittney Griner has been moved from her Moscow jail to a Russian penal colony. The move, long feared by her family, now stokes questions about Griner’s whereabouts as her Russian legal team was not alerted and currently has no knowledge of where she is or is headed.

According to ESPN, Griner’s transfer began on Friday ahead of schedule anticipated, as transfers typically take weeks or months after a conviction. Griner’s legal team was not aware of the move until Tuesday.

In addition, Griner’s location may not be known for some time. Her legal team stated, “Notification is given via official mail and normally takes up to two weeks to be received.” Official mail is considered a postal service. Russian penal colonies are known for harsher conditions than Griner experienced during her time in a Moscow jail.

“Every minute that Brittney Griner must endure wrongful detention in Russia is a minute too long,” White House press secretary Karine Jean-Pierre said in a statement early Wednesday morning. “As the Administration continues to work tirelessly to secure her release, the President has directed the Administration to prevail on her Russian captors to improve her treatment and the conditions she may be forced to endure in a penal colony.”

Griner’s agent, Lindsay Kagawa Colas, states she remains in “close contact” with the U.S. government and is hopeful for a holiday return.

“We are thankful for everyone’s support, and hope that as we near nine months of detention, that BG and all wrongfully detained Americans will be shown mercy and returned home to their families for the holidays,” Colas said.

The post Brittney Griner’s Location Is Unknown as She Is Transported to Russian Penal Colony appeared first on The Source.