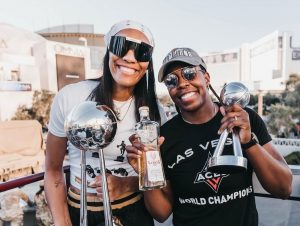 When the Las Vegas Aces won their first major professional sports championship for Las Vegas yesterday, they did it using Lobos 1707 Tequila in honor of a historic occasion.

The team celebrated the significant victory, demonstrating that Lobos 1707 has been a preferred brand among championship teams over the last year.

Draymond Green of the Golden State Warriors and Juan Toscano-Anderson were seen sipping Lobos tequila earlier this summer while attending the Warriors parade to celebrate their championship win.

Draymond Green, Kevin Durant, and the rest of Team USA Men’s Basketball partied all weekend long after defeating France to win gold in the Tokyo Olympics only last year, and they praised Lebron James on social media for the post-gold tequila celebration.

Independent distiller Lobos 1707 creates spirits with a blend of tradition and modernity. Lobos 1707 was established in 2020 by founder and chief creative officer Diego Osorio, along with LeBron James, a renowned athlete, and brand-builder Dia Simms, both of whom were inspired by Osorio’s ancestor of the same name.

The post SOURCE SPORTS: A’Ja Wilson and the Las Vegas Aces Celebrate with Lobos 1707 During Championship Parade appeared first on The Source.