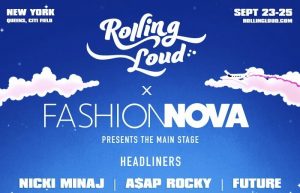 Rolling Loud returns to New York City for its final stop of the year on Sept. 23-25 at Citified in Queens. The festival has taken over Miami, Netherlands, Portugal and most recently Toronto in 2022. It continues to reinvent their curation of how fans experience a music festival. In their most recent partnership, Rolling Loud taps leading online fashion e-commerce brand, Fashion Nova, as the exclusive retail sponsor.

The main stage will be rebranded as the Fashion Nova Stage. In addition, the retail brand will host a specific section inside Rolling Loud’s, VIP experience, The Loud Club. This year’s activation will include the debut of an all-new exclusive hoodie, for “Hoodie Season.”

The hoodie is just one of many pieces included in a limited run of merch that is inspired by the festival’s lifestyle and culture at Hip-Hop’s birthplace of New York City.

Fans can use promo code, “Fashion Nova,” at check for $100 off when purchasing Rolling Loud tickets.

The post Fashion Nova Partners with Rolling Loud New York as The ‘Main Stage’ Sponsor appeared first on The Source.