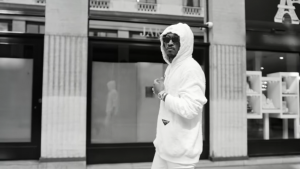 Future hit Paris for his “I’M DAT N****” video and showed what a Free Bandz lifestyle is like overseas. Hitting a rooftop, Future blows aa bag at Celine and takes rooftops while rocking a crisp white Prada jacket.

The experience for Future includes a trip on a massive yacht, strolling through the foreign land, dinner with a batch of baddies and more.

Future may be making return trip to France as he wracked up a big bag recently. Influence Media, an entertainment firm with headquarters in New York City, has purchased Future’s publishing library. A source with knowledge of the transaction reportedly told Variety that the deal was worth eight figures. An estimated number by Billboard places the number between $65-$75 million.

The post [WATCH] Future Lives a Lap of Luxury in Paris in “I’M DAT N****” Video appeared first on The Source.