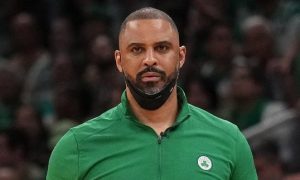 Boston Celtics head coach Ime Udoka is facing what is suspected to be a “significant suspension” after engaging in a consensual relationship with a member of the franchise’s staff.

ESPN‘s Adrian Wojnarowski reports the relationship is a violation of the organization’s guidelines, and the length of the suspension is expected to be announced on Thursday. Udoka is expected to keep his position, but he could be suspended for the entire season.

Udoka would be entering his second season as the Celtics coach. Last year, he came over from the Brooklyn Nets as an assistant coach, replacing longtime coach Brad Stevens and leading the Celtics to within two wins of an NBA championship. He was the fifth coach to lead a team to the NBA Finals in the last 25 years.