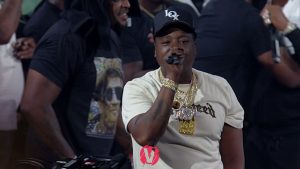 Jadakiss spent some time in his career writing on Bad Boy Records. Speaking with Smoke DZA on The Art of Dialogue podcast, Jadakiss revealed he hated it.

“After giving him “Benjamins,” “Seniorita,” “Victory,” a couple remixes, I used to feel like it was taking away too much of me,” Kiss said. “It ain’t like he was a nigga from my whole life, and I could scribe how I think he should be. I feel like I couldn’t write the bars for myself and give it to him. He had too much money.

You can tap into Jadakiss on his experience below.

The post Jadakiss Says He Used To Hate Writing for Diddy: ‘It Was Taking Away Too Much of Me’ appeared first on The Source.